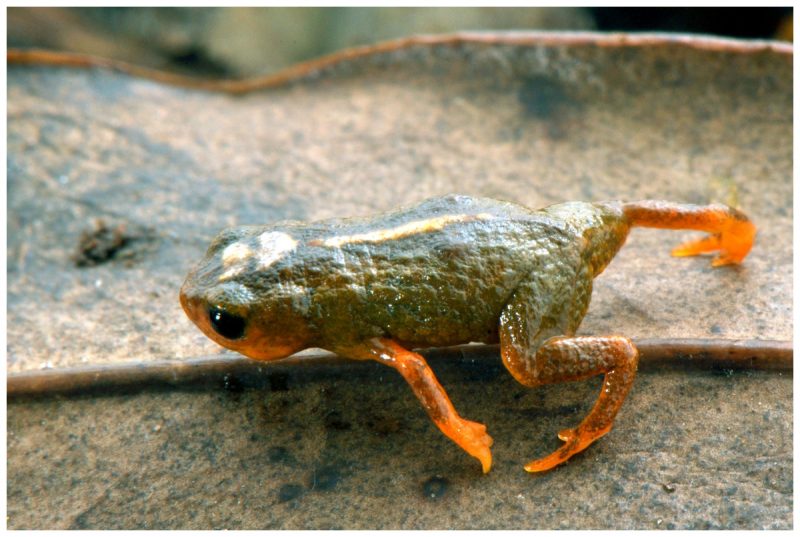 Amphibians are exceptionally good at being small. There are salamanders the size of your thumb nail, pygmy newts that live in moss patches and feast on microscopic insects, and inch-long African frogs that spend their entire lives in and around the banks of small puddles. In fact, the title for the world’s smallest vertebrate is currently held by a species of frog that could perch comfortably on the head of a pencil eraser.

A new study published in the journal Scientific Advances shows that all this downscaling doesn’t come without serious drawbacks. In an evolutionary first, researchers have shown that a group of frogs alternately called pumpkin toadlets and flea toads have become so small they’re no longer able to maintain balance during quick maneuvers, like jumping.

The researchers studied four species in the genus Brachycephalus, showing that these miniature frogs are able to jump when gently prodded, but invariably lose control of their trajectory mid-leap, ungracefully pirouetting through the air before coming in for a crash-landing.

“They’re not great jumpers, and they’re not particularly good walkers either. They sort of stomp around in a stilted, peg-like version of walking.” said study co-author Edward Stanley, director of the Florida Museum of Natural History’s Digital Discovery and Dissemination Laboratory.

Researchers were able to pinpoint the likely cause of this impractical mode of transportation through oVert, a four-year initiative among 18 institutions to create to create 3-D models from CT scans for more than 20,000 museum specimens across the U.S.