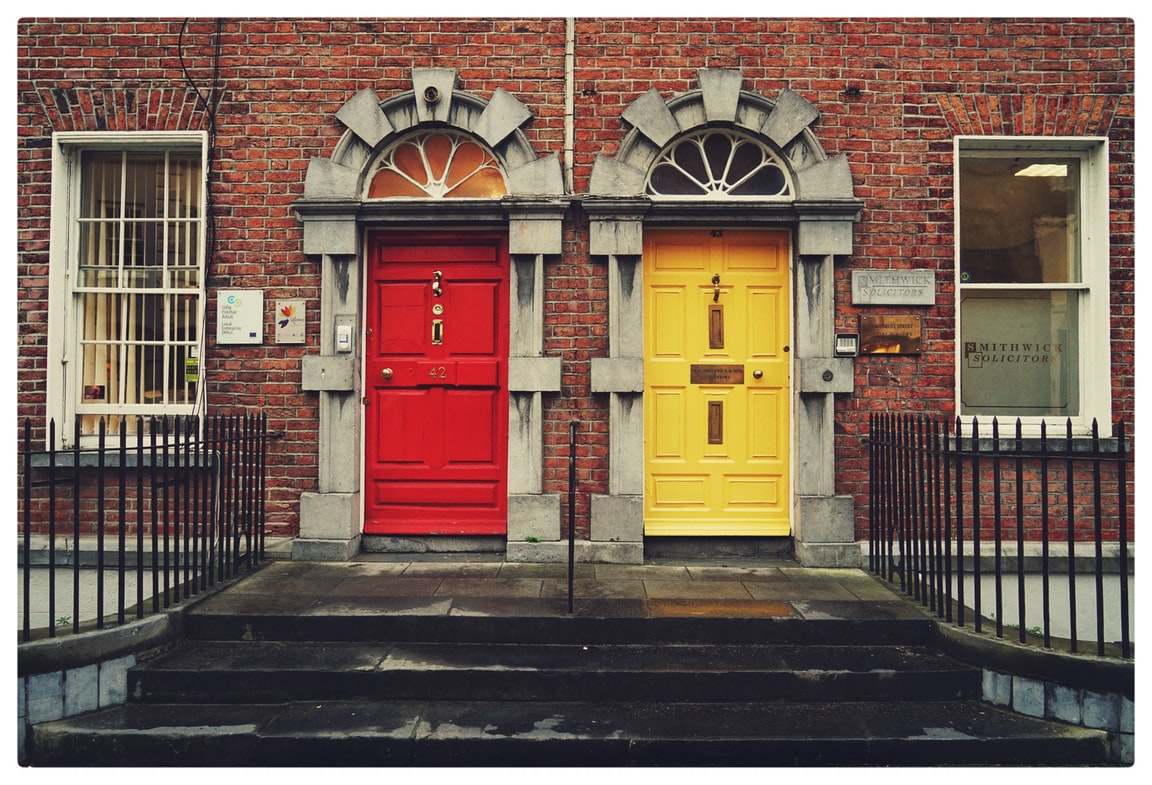 For those who have made a trip to a doctor or clinic during the oncoming flu season, the most nagging concern is whether their symptoms are indicative of the garden-variety bug that is making the rounds in the workplace or a potential COVID-19 infection. As researchers scramble to treat this virus — and its inevitable variants and mutations — one of the biggest challenges has been quickly and accurately diagnosing the source of the illness so that the proper treatment protocols are administered, and in time to decrease the odds of potentially dangerous complications.

Led by Dr. Z. Hugh Fan, Ph.D., professor at the Herbert Wertheim College of Engineering’s Department of Mechanical and Aerospace Engineering, and Dr. John Lednicky, Research Professor at the College of Public Health and Health Professions’ Department of Environmental and Global Health, an interdisciplinary team at the University of Florida has developed a game-changing diagnostic test for SARS-CoV-2 that is fast, reliable, low-cost and capable of differentiating between COVID-19 and influenza. 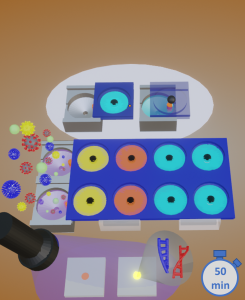 (top) rendering of the ball-based valve mechanism that is similar to a ballpoint pen, in which ink is dispensed onto paper when the metal ball at the tip is pressed while writing. the valve is closed when the ball functions as a plug for the well at the top. the valve is open by the pin in the unit at the bottom that lifts the ball up when the pin is aligned with the ball after sliding, releasing the reagent. (middle) a sample is introduced into the bottom well, followed by sliding the bottom well to have a sequential delivery of 4 reagents for virus lysis and rna isolation/purification. (bottom) colorimetric detection aided by a uv flashlight and the overall time from sample to answer in 50 min.

Dr. Fan and his team demonstrated the ability to detect two viruses in 50 minutes without using bulky or sophisticated laboratory equipment or power supply, and with detection sensitivity that is on par with that of the gold-standard RT-PCR (reverse transcription polymerase chain reaction) assay, which is the test recommended by the World Health Organization and the Centers for Disease Control and Prevention. The effort is supported by the National Institutes of Health.

“In patient-care terms, this innovative sample-to-answer platform is an important upgrade from the existing RT-PCR standard on several levels,” Dr. Fan said. “With regard to diagnosis, the turnaround time is less than an hour at the testing spot compared to one to two days from an offsite testing lab.” 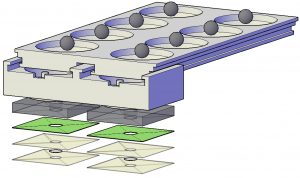 Exploded view of the device consisting of 3 components, including a buffer unit at the top, a mixing unit in the middle, and the detection unit at the bottom. the buffer unit contains 4 wells in each side for the storage of a lysis buffer, a binding buffer, and 2 washing buffers for sample preparation. in each well of the buffer unit one stainless steel ball is placed at the bottom that functions as the valve. the mixing unit has one well in each side and it slides under the buffer unit through the sliding tracks on both sides and in the middle. the detection unit contains a paper pad that is laminated between two thermoplastic films and attached to the well layer using a double-sided adhesive tape.

The UF-engineered device was recently published for peer review in ACS Sensors, the flagship journal of the American Chemical Society, focusing on sensor science.

RT-LAMP (loop-mediated isothermal amplification) is an assay used for viral RNA detection. The methodology for RT-LAMP was based on the mechanism behind auto-cycling strand displacement DNA synthesis. A polymerase carries out the reaction, and the polymerase has high strand displacement activity. There are also two pairs of primers used, one pair of inner and another of outer primers. These primers are specially designed for the reaction. RT-LAMP achieves high specificity due to the target sequences. Unlike other technologies, RT-LAMP recognizes the target sequence using six independent sequences at the start, giving it high specificity. Primer recognition of the target genome leads to a strong colorimetric reaction, which allows for detection without highly specialized or costly instrumentation.

“RT-LAMP technology has numerous advantages over standard RT-PCR,” Dr. Lednicky said. “The cost of reagents is low compared to an equivalent RT-PCR reaction, results are obtained more quickly, and equipment needs for RT-LAMP are low, which is a major advantage for users in resource-strapped countries or for use in doctor’s offices and clinics. Also, packaged RT-LAMP reactions in a kit format take up little storage space and can be freeze-dried, alleviating the need for freezer storage.”