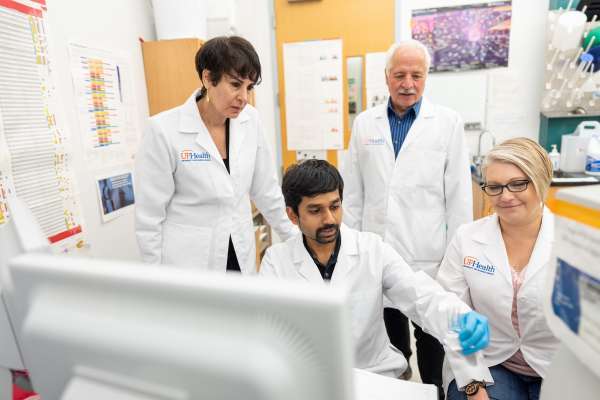 A team of UF neuroscientists led by Habibeh Khoshbouei, Ph.D., Pharm.D., Professor of Neuroscience and Psychiatry in the UF College of Medicine, has recently discovered a novel method using blood-borne immune cells to study the role of the neurotransmitter dopamine in the human brain.  This finding was reported in a publication titled ”A novel approach to study markers of dopamine signaling in peripheral immune cells” appearing in the Journal of Immunological Methods.

Dopamine is an organic molecule synthesized in the brain that plays important roles in several key brain functions. The binding of dopamine to brain-cell surface dopaminergic receptors leads to the activation of cellular signaling cascades that are associated with reward-motivated behavior and motor control with dysfunction of the dopamine system leading to numerous diseases. For example, degenerative Parkinson’s disease is caused by the loss of dopamine-secreting neurons that leads to motor impairment.

The novel method developed by the UF team of scientists can be applied to study peripheral dopamine signaling under healthy and potentially under disease conditions. The use of dopamine signaling could also be explored as a technique to monitor therapeutic interventions particularly those targeting specific protein involved in dopamine signaling in the blood.