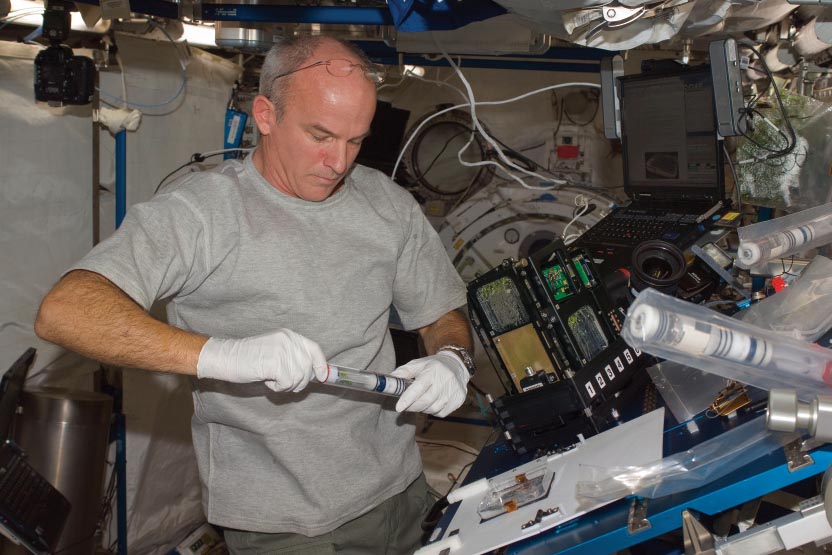 As recent news featured revolutionary trips into space, two Ph.D. plant molecular biologists were making their own galactic headlines. Their pioneering work may ultimately hold the key to traveling and living beyond Earth for long periods of time. Anna-Lisa Paul, University of Florida Institute of Food and Agricultural Sciences professor and co-principal investigator of the university’s Space Plants Lab, and Rob Ferl, distinguished professor and principal investigator of the same, are evaluating how plants respond and adapt to spaceflight and the zero-gravity environment.

“Our purpose is to take plants off our planet and understand the impact of the novel environment of spaceflight on them to help enable greater deep-space exploration,” Paul says. “Gene expression informs how plants adapt. That knowledge will allow us to be residents, not just visitors, to space in the future.”

Paul and Ferl are working with the flowering weed Arabidopsis thaliana, which has been genetically engineered to display its adaptation response to stress. The duo says the species is considered “the white mouse of the plant world.”

“Environmental changes almost always lead to changes in gene regulation. We send these plants to the International Space Station where astronauts can take macroscopic and microscope images of them as they grow, while our lab on Earth monitors the experiments,” Ferl explains. “The plants are fixed in a solution that preserves their on-orbit metabolic state so once they return to earth, we can perform a variety of tests and determine how the plants responded to time in space.”

Working with NASA, the researchers first sent plants on the Space Shuttle Columbia in 1999 and have since launched 10 spaceflight experiments to the International Space Station. More recently, they flew plants on the 2018 and 2021 Virgin Galactic flights and two flights with Blue Origin. The latest plant experiment on the Virgin Galactic flight represented the first human-tended experiment in suborbital space.

In addition to studying how food might be grown in space, the research offers insight into food production challenges on Earth. Paul says by having a greenhouse on the moon or Mars, scientists will see how a novel, hostile environment there might help farmers address stressors on Earth, such as global warming or pollution, and determine how to make adaptations to better sustain food production.

“Our work paves the way for plants to be grown in habitats that allow us to remain in space. I may not be here to see a greenhouse on Mars, but I like to think the work we are doing today lays
the foundation for that future success,” Paul says.