Some nonnative fish that are released into lakes and rivers thrive in Florida; alter ecosystem 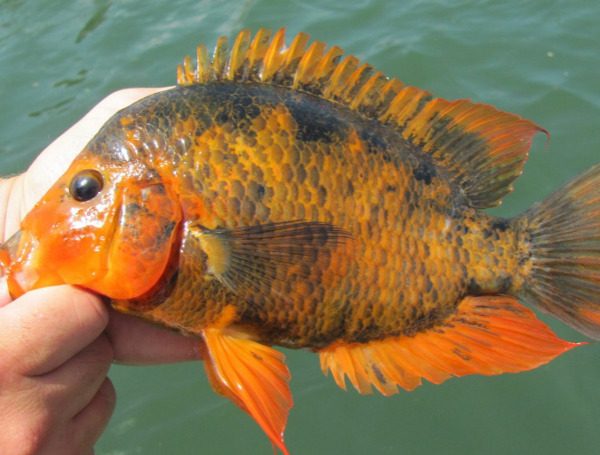 RUSKIN, Fla. — Nonnative fish eat away at the banks of rivers and lakes – one reason University of Florida researchers caution people not to release unwanted fish.

People sometimes put fish from their aquariums into nearby waterways. Each year, nonnative species can cause $120 billion in damages in the United States. Billions more are spent on prevention, detection control, management and habitat restoration, according to the U.S. Fish and Wildlife Service.

Because of the potential peril nonnative fish pose to aquatic habitats, UF/IFAS researchers studied fish behavioral traits that increase their chances of survival in Florida’s fresh waters. Among the scientists’ findings: If the fish are good parents, they’ll likely establish in Florida’s peninsula.

“When these species are released into the environment, they may survive, find mates and reproduce,” said Katie Lawson, a former UF/IFAS researcher who led the study while a doctoral student at the Tropical Aquaculture Lab in Ruskin. “Some of our established fish species have noticeable impacts.” This photo shows a Hypostomus — a type of catfish. UF/IFAS researchers studied 125 species of nonnative fish that can establish in Florida’s fresh waters. Scientists found that nonnative fish that care for their young are more likely to establish in Florida’s fresh waters, a key factor in managing them. Meanwhile, they urge people not to release unwanted aquarium fish into nearby bodies of water. Photo courtesy of Katie Lawson.