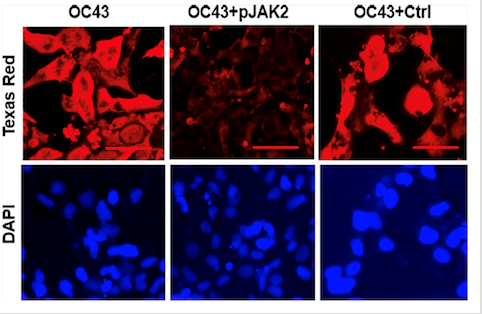 When the virus that causes COVID-19 enters the body, it hijacks cellular proteins and suppresses the human inflammatory response, allowing the virus to spread. University of Florida researchers have discovered a novel way in the lab to fight rapidly evolving strains of coronaviruses by breaking that cycle.

The group created a molecular “decoy” that blocks two proteins coronaviruses use to evade a normal immune system response. Blocking these proteins prevents the virus from taking hold within human cells, the researchers found. During early tests, short chains of amino acids, known as peptides, inhibited the replication and release of two coronaviruses including SARS-CoV-2. The findings were published recently in the journal Frontiers in Immunology.

“These peptides have the potential to allow our immune system to fight off the virus more effectively,” Lewin said.

To establish their findings, the researchers focused on two coronaviruses. One is a seasonal virus that causes upper-respiratory infections like the common cold. Researchers at UF and elsewhere already knew that people with antibodies to it were less likely to develop serious COVID-19 infections.

That potential benefit intrigued Chulbul M. Ahmed, Ph.D., a research assistant professor of molecular genetics and microbiology. Their team developed a peptide known as pJAK2. During testing on human cells, the compound significantly reduced the viruses’ concentrations and ability to replicate. In SARS-CoV2 the peptide reduced the virus’s replication more than tenfold, the researchers found. The cell-penetrating peptides work by acting as a decoy and suppressing two proteins that would otherwise allow invading viruses to thrive.

When the peptide was combined with a second virus-inhibiting protein, viral activity was inhibited even further than with either peptide treatment alone. Read more

is a user in ICBR’s Cytometry core